With over 40 years of legal experience, and a life experience that spans far beyond courtrooms, Paula’s first and still abiding passion is State court criminal defense – defending people charged with crimes in any of California’s 58 Counties. She has tried virtually every kind of criminal case; from DUI cases, to trespass, theft, drug charges to murder – you name it she has done it. 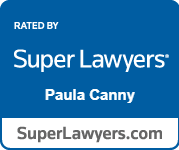 Paula advocates for the humane treatment of jail inmates by bringing lawsuits against California Counties and the State of California.  She has filed lawsuits against various California Counties to require Sheriffs to provide menstrual products to women inmates without charge.  It took two years of work.  Paula won.  Paula led the same charge in Oregon and Hawaii.  Now women inmates in all West coast states receive free access to the menstrual products of their choice.

As a gifted public speaker, Attorney Paula Canny is a no nonsense truth-teller with a great sense of humor.  She is a frequent legal commentator on local television and radio.  She has provided commentary on all types of cases for all major media outlets.

She is actively involved in various social justice organizations, loves the Khumbu region of Nepal and supports the American Himalayan Foundation and the Stop Girl Trafficking Program.

Paula’s personal life and professional career are based on her desire to help people – to be of service.  She never gives up and always tries to be grateful.  These attitudes shape her approach to practicing law and life.

Attorney Paula Canny is licensed to practice law in Hawaii and Federal Courts. She attended Georgetown Visitation in Washington, D.C. for high school; Hamilton College (Kirkland) in Clinton, New York for College and the University of San Francisco School of Law for her J.D.